Produced and Directed by: Chris Nicholas.


"Role Reversal is a documentary about what happens when our aging parents are no longer able to care for themselves and how we, the adult children take on the role of caregiver…. Filmmaker Chris Nicholas uses his own experience of caring for his ailing mother as a means of helping us all prepare for the inevitable.”
-rolereversalmovie.com

‘Role Reversal will delve into what Chris Nicholas did to make his mother’s final years as comfortable, enriching, and beautiful as possible, through good times and bad. He will also interview health care professionals, and share the stories of others that are at various stages of taking care of their aging parents. The goal is to create a film that will inspire us to honor our parents, letting them live their final years with dignity and compassion. It will educate and inform, providing the tools necessary to navigate this rocky path and to learn how to take care of ourselves while also caring for our loved one.’
-rolereversalmovie.com

Find out more about the documentary "Role Reversal"

"YOU SEE ME: FORGIVENESS IS RELATIVE"

Produced and Directed by: Linda Brown.


"...How can we speak of our parents when we have been the victims of abuse?" -youseememovie.com

"After Stanley's death in 2006, Linda combed through his collection of home videos trying to make sense of a man whom she deeply loved, but also found difficult to love because of his emotionally distant, sometimes physically abusive nature. The genesis of that abuse, never openly discussed in the family, becomes evident as she pieces together his life and the impact of his secret shame: Stanley was an illegitimate child, spurned by his mother and abandoned by his biological father. This information helps Linda as she attempts to reconcile the weak version of her father in his final days, with the domineering version from her childhood that was such a powerful and moody presence in the lives of her mother, her siblings, and herself."
-youseememovie.com

Find out more about the documentary "You See Me: Forgiveness Is Relative 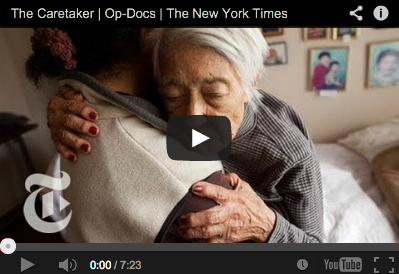 "This Op-Doc video explores the relationship between an immigrant caretaker and an elderly woman in the last months of her life. Joesy, a Fijian immigrant, works long hours providing live-in care for 95-year-old Haru Tsurumoto in Sonoma County, Calif."
source: nytimes.com

Find out more about the New York Times documentary "The Caretaker" 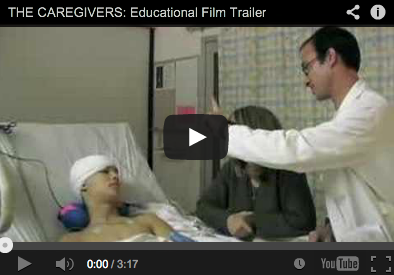 "The Caregivers Project began as a collaboration between the Osher Center and the Department of Neurosurgery to help improve the quality of life for both family and physician caregivers, and hence the quality of patient survivorship, by encouraging mutual empathy and respect."-osher.ucsf.edu

Find out more about the documentary "The Caregivers Project"


"CAREGIVERS: A FILM ABOUT THE EMOTIONAL IMPACT ON PROFESSIONALS WHO CARE FOR OTHERS"

Produced and Directed by: Vic Compher. 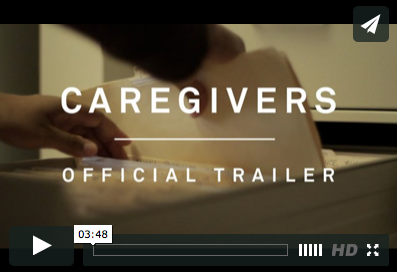 "We ask the question: How is the care provider affected emotionally and physically, and who helps him or her?! The audience will discover that engaged empathic caregiving can be an occupational hazard; we explore the painful and human sides of these professions and the professionals' response to trauma known as Compassion Fatigue or Secondary Traumatic Stress. We also recognize the profound meaning caregivers may experience, sometimes referred to compassion satisfaction."
source:caregiversfilm.com

Find out more about the documentary "Caregivers: A Film About The Emotional Impact on Professionals Who Care for Others"


"FAMILIES ON THE BRINK: WHAT TO DO ABOUT MOM & DAD" 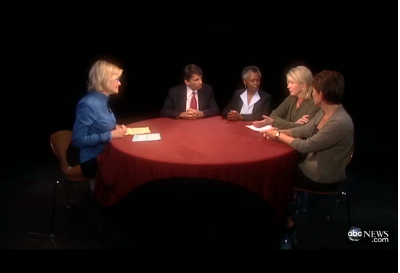 “One of the most difficult responsibilities families face is taking care of relatives who can no longer take care of themselves. It has been projected that boomers will spend more time taking care of their parents than they did raising their children...A Special five part series on the Issues Surrounding Aging Relatives and Those Who Care for Them."

"1.THE CONVERSATION: With Martha Stewart who teamed up with Mount Sinai Medical Center to open the Martha Stewart Center for Living, which specializes in elder care and it is dedicated to her mother; Neil Resnick, M.D., the chief of geriatric medicine and gerontology and director of the Institute on Aging at the University of Pittsburgh; Marie A. Bernard, M.D., a noted geriatrician and educator from the University of Oklahoma who was named deputy director of the National Institute on Aging in 2008; Virginia Morris the author of How to Care for Aging Parents.
2.THE FAMILY FALLOUT: Deborah Roberts examines the family turmoil that can ensue when a group of siblings suddenly find themselves on the same team trying to help a parent. Should there be an agreed upon family plan before your folks get sick? Roberts offers tips from experts on how to navigate successfully through this issue.
3.THE MEANING OF HOME: For so many, home is their identity, but as we live longer, mom and dad need extra help. Cokie Roberts takes a closer look at the burgeoning movement to bring caregivers and amenities into the home rather than moving mom and dad out.
4. THE TIME TO HANG UP THE KEYS: One of the most emotional and difficult things to confront is when it is time for your relative to limit their driving. Ron Claiborne follows a family struggling with this sensitive topic. He offers tips on what signs to look for and how to proactively discuss when it’s time to hang up the keys.
5.THE MEDICINE: Among Americans 57-85 yrs old, 29% are taking 5 prescription drugs at the same time – Without the oversight of a geriatrician it can be dangerous. Dr. Richard Besser explores new ways people can streamline their medications in a safe way.” source: abcnews.com

Watch the Full Series and Find out more about the ABC documentary "Families on the Brink: What to do about Mom & Dad" 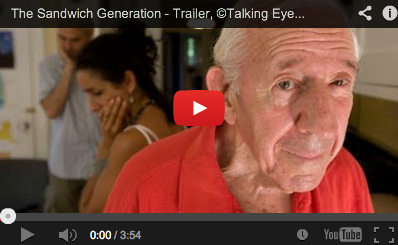 The Sandwich Generation refers to individuals who are parenting children and taking care of aging parents. The film tells a real life story of family caregiving and being caught in the middle.

"The Sandwich Generation, those caught between their aging parents and young children, includes some 20 million Americans.

In this emotionally charged account of family caregiving, filmmaker Julie Winokur and her husband, photojournalist Ed Kashi, expose their personal lives with unflinching candor. Winokur and Kashi uprooted their two children and their business in order to move 3,000 miles cross-country to care for Winokur’s father, Herbie. At 83, Herbie suffers from dementia and can no longer live alone. Winokur and Kashi are faced with difficult choices and overwhelming responsibility as they charge head on through their Sandwich years. It is a story of love, family dynamics and the immeasurable sacrifice of those who are caught in the middle."
source: talkingeyesmedia.com

Find out more about the documentary "The Sandwich Generation"

"The '& Thou Shalt Honor' documentary premiered on PBS in October 2002. It shows the far-reaching change in the way we care for our ill and aging parents, spouses, friends and loved ones. It cites the increase in the number of caregivers to be a result of the success of medical technology. Advances in medical technology made it possible for individuals to survive for years with diseases and chronic conditions that would have made a rapid death just a few years before. Though laudable, this created a new population of persons in need of caregiving ... and, therefore, a new population of caregivers. Many, if not most, of us will be both in our lifetimes -- caregiver and the cared-for. We may slip into these roles so gradually that we scarcely realize it. Or, as the social scientists say, we may not self-identify. 'And Thou Shalt Honor' examines the various aspects of caregiving in a warm and caring documentary coming that started to air on PBS stations October 2002. The documentary was then followed by another entitled The '& Thou Shalt Honor' National Caregiving Town Hall Meeting, which interviewed citizens and Washington lawmakers on issues that have daily impact on family caregivers and their loved ones."
source:pbs.org/thoushalthonor

Find out more about the PBS documentary "& Thou Shalt Honor"

"THE SANDWICH GENERATION: A GENERATION CAUGHT BETWEEN TWO OTHERS"

"For the 20 million Americans who are struggling to juggle caring for their elderly parents while raising their own families, there is little good news. Resources already stretched to the breaking point are growing scarcer, because the United States isn't recruiting or training nearly enough geriatric care specialists to meet the needs of a rapidly aging population. The non-profit Pew Research Center discovered some startling statistics in a study it released a little over a year ago: Slightly more than 1 of every 8 baby boomers, those Americans roughly ages 40 to 60, are simultaneously raising a child and providing some form of financial assistance to a parent. Demographers call them the "Sandwich Generation."
source: msnbc.msn.com

Find out more about the NBC documentary series, "Trading Places: Caring for Your Parents"

Produced and Directed by: Ira Wohl.

"The second installment in the 'Best Boy' trilogy, 'Best Man,' was released in 1997, twenty years after 'Best Boy.' 'Best Man' picks up the thread of Philly's story when he is 70 years old and shows how he has not only survived, but thrived in the independent environment he found at the end of 'Best Boy.' "

"It came out of nowhere to win the best documentary Oscar in 1980, and by now Best Boy should be acknowledged as one of the finest documentaries in film history. Filmmaker Ira Wohl took as his subject his own cousin, 52-year-old Philly, a retarded man who had lived his entire life with his parents. Seeing the physical decline of the parents, Wohl suggested they prepare Philly for living away from home for the first time in his life...The second installment in the 'Best Boy' trilogy, 'Best Man,' was released in 1997, twenty years after Best Boy. Best Man picks up the thread of Philly's story when he is 70 years old and shows how he has not only survived, but thrived in the independent environment he found at the end of Best Boy. Still living in the same group home, Philly is supported by the staff there, the staff at his day center, the friends with whom he now lives, and the ongoing love he receives from his sister, Frances. Whether it be at his day center, in his Jewish cultural activities or at inter-group-home dances and events, it is also clear that his social life and interpersonal relationships have improved greatly." source:bestboythemovie.com,amazon.com

Find out more about the documentary the "Best Boy"

"In sub Saharan Africa, AIDS is wiping out a generation of parents, leaving 13 million orphans behind. A similar thing is happening in cities all across America. AIDS, drugs, and violence are wiping out a generations of parents, leaving millions of children behind. Grandmothers, often impoverished themselves, are rescuing the children and struggling to raise them. This film introduces two outstanding projects – one in the Bronx, one in Tanzania."
source: olddogdocumentaries.com

Find out more about the documentary "Grandmother to Grandmother: New York to Tanzania"

Produced and Directed by: Gzowski Films.

"Parenting our parents, can we ever pay our debts to them."
source:Balance-Caregiving for Ageing Parents

"An episode of the CTV series Balance, hosted by Valerie Pringle, on the sandwich generation and Caregiving for Ageing Parents. This 30 minute documentary profiles three families and examines the way they with elder care."
-youtube.com Gzowski Films.

Find out more about the documentary "Balance - Caregiving for Ageing Parents"


"CARING FOR YOUR PARENTS"

Produced by: WGBH Interactive for PBS.
Directed by: Michael Kirk.

Adult children are dealing with the transition into the primary caregiver role for their aging parents. 'Caring for Your Parents' begins by announcing that each of us in our own lives will experience at least some part of the stories presented. This PBS presentation is a two-hour film that covers five families who are going dealing with aging. Topics covered include the struggle to keep parents at home, loss of independence, cost of long-term care, sibling tension, caregiver roles, and who cares for the caregivers. source:pbs.org

Watch the entire documentary "Caring for Your Parents" on PBS